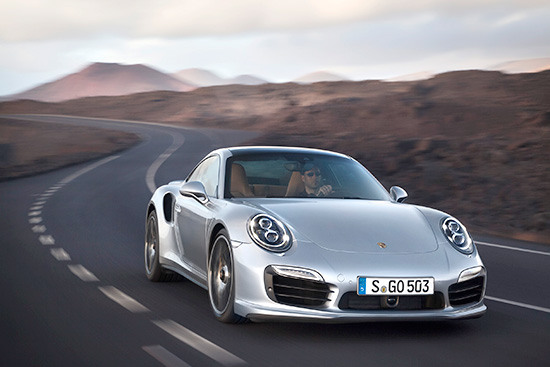 We’ve been saying it for some time, but it bears repeating – turbocharging is the future!

More and more manufacturers are turning to the turbo in an effort to reduce emissions and maximise fuel economy, and 2014 looks like it could be the year of the turbo, with a number of fantastic new passenger vehicles coming to market.

In this post, we take a quick look at some of the upcoming turbocharged cars set for launch over the next 12 months.

40 years after the first 911 Turbo hit the market, Porsche is releasing the latest iterations of its iconic range, the 911 Turbo and 911 Turbo S, and as you might expect, they’re absolutely fantastic.

At £120,000 and £140,000 respectively, you may need a second mortgage to afford one, but it’s still significantly cheaper than direct competitors from Ferrari or McLaren, and will take you from 0-62 in under 3.5 seconds!

Under the bonnet, you’ll find a turbocharged 3.8 litre flat 6 producing 520BHP (560BHP in the S), making them both supercar quick.

With fuel economy at a fairly respectable 29.1MPG and CO2 emissions of 227g/km, it isn’t going to win any awards for efficiency or environmental friendliness – but that’s hardly the point!

Set for a Spring launch, the VW Golf R is set to be the most powerful Golf ever, thanks to a 2.0 litre turbocharged engine that delivers 296bhp, and should be capable of doing 0-62 in 5.3 seconds.

Whilst that’s pretty good in itself for a sub £30k car, what’s even more impressive is that the Golf R will still provide fuel economy of around 40MPG, and CO2 emissions of around 159g/km.

With 4-wheel drive, lowered suspension, and VW’s excellent DSG gearbox, we expect the Golf R to provide the perfect balance between fantastic driveability and real-world practicality.

The Ford Mondeo is changing – once considered the ultimate in boring, middle of the road motoring, the 2014 model looks sleek, modern, and dare we say it, quite exciting!

Larger, more refined and packed with modern gadgets, it looks every inch a premium, large family car. Whilst there will be a wide range of engines available, including a hybrid, it’s the 1.0 litre EcoBoost engine that’s most revolutionary.

This tiny turbocharged three-cylinder is a bit of a pocket powerhouse, capable of delivering 125BHP, which should provide economic, low-emission motoring and enough performance for most road users.

Whilst it’s unlikely to win the favour of off-road enthusiasts, it is both practical and spacious, and should provide good competition for the likes of the Nissan Juke.

Under the bonnet, you’ll find the same 1.0L turbocharged EcoBoost engine that’s going into the Mondeo, which provides excellent economy when compared to other models in the class.

If you’re looking for a practical, spacious 4×4 on a budget, then there are few better cars than the Skoda Yeti, and it’s enjoying a mid-life facelift for 2014.

The new model features new bumpers, grilles, lights and bonnet, with a top-hinged tailgate that provides good shelter from the British weather when enjoying the great outdoors.

Available with a range of efficient turbocharged petrol and diesel engines, the Yeti great for big families, and those who want a capable 4×4 that won’t break the bank.

2014 will also see the release of the long anticipated 3rd generation Audi TT, which is set to be unveiled at the Geneva Motor Show in March. Since it’s release in 1999, the TT has set the benchmark for the sports coupe, and helped to establish Audi as the brand it is today.

For the 2014 model, superior aerodynamics, weight reduction and new styling will all contribute to improved efficiency and performance, and a sleeker, more modern exterior, as Audi looks to compete with the likes of the Porsche 911.

At AET, we’ve got over 40 years experience providing cost effective, high quality turbocharger repairs and replacements for a full range of passenger and commercial vehicles.

For further information or advice on any aspect of our service, get in touch with a friendly, expert member of our team today on 01924 588 266.