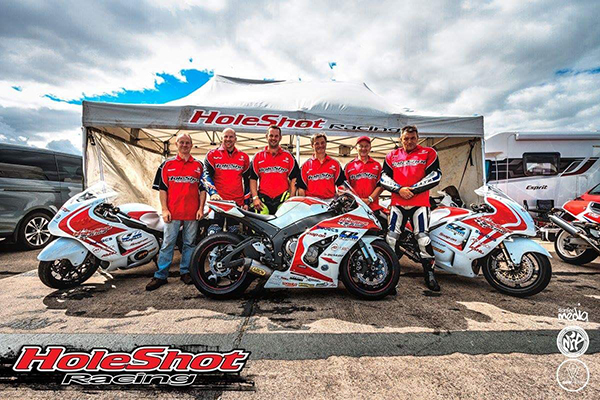 What a great weekends racing. Cecil “Bubba” Myers was over from the US to ride our bikes, He was riding our ZX10 turbo for the speed wheelie kilometre record and I was riding one of our hayabusa, and Steve Bland riding our other hayabusa.

The weather was not too kind to us, but stayed mostly dry. Saturday was up to 20mph side winds and we just had to make best of a bad job.

We were straight away fastest on our hayabusas at 244 and 241mph on Saturday with us both going anything but in a straight line, but was all good data for Sunday as we knew the weather was due to be a lot better.

Saturday was first time sitting on the ZX10 for Bubba since last year’s event? He was struggling with wind, so we made the bike as easy as we could to ride for him, taking away nearly all boost and removing the lower fairings to help with the side winds, Gearing and foot peg positions, etc.

He was still struggling so I had a go on the zx10, and winding all the power out of it was the wrong way to go, but as he was not used to the bike he was also didn’t realise the issues and how to describe what it was doing.

For high speed wheelies we need to lift the wheel ideally in 6th gear and accelerate from there. So after a bit of guidance and changes we got him in the swing of it. The next day the weather was kinder.

Bubba was one of the first to run a full kilometre wheelie at 174 and then got faster every run. Gary Rothwell set the mark at 204mph (a little shy of his own record at 209), Bubba was quick to get near and ran 197, and just missed out on a 204 run himself just dropping the front a fraction before the end of the kilometre and Gary upped it to 206mph.

Myself and Steve were out running very consistent 250’s, Steve doing near his personal best at 251 and I ran 259, which was well shy of my personal best but conditions on the day did not allow any faster. I had to roll off on my fastest run and I was doing 267mph well before the end and should have been a 270mph pass

Late in the day our friend from Holland raised the wheelie record to an incredible 213mph for the kilometre. Gary was determined to go better again but a slight boost control problem held him back slightly, which is now sorted.

Overall especially for the conditions it was a great weekend, some great rivalry on track and close racing. Top speed we finished 1st, 2nd, 3rd, 4th with Mike Grainger and Les Marsh. Wheelies we finished 2nd and 3rd fastest in the world and saw a new world record made. We also had Ted Brady on one of our new busa kits and Paddy Sullivan, big hopes were on them to also break 200mph wheelies, but although close, both had stability issues and will have to wait to the next time to try again

The bikes all look great and performed great. It was a pleasure to have Bubba on our team and watch him achieve his goal.